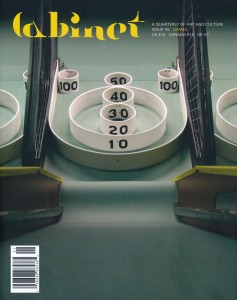 Here’s the cover of the Spring 2012 issue of Cabinet Magazine.  Skee-ball, skee-ball everywhere!  The issue includes “The Games Game Theorists Play” by Order of the Third Bird member and Princeton Professor of History, D. Graham Burnett, who joined visiting artist Sal Randolph for a meeting of the Order at Magill Library on April 4th.

In his essay Burnett explores the game “So Long, Sucker,” arguing that it is

… something more than a liberal pessimist Cold War mini-drama.  It is also a gamified tutorial in the circumscribed utility of traditional game theory itself—a kind of penitential rite for those excessively enamored with calculating reason: call it game-penance for game theorists.