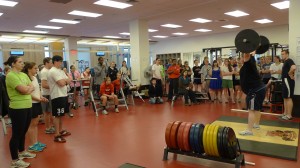 Silverdocs, the most talked about documentary festival in the United States, starts today! A seven-day international film festival and five-day concurrent conference that promotes documentary film as a leading art form, Silverdocs makes a point of supporting work of independent filmmakers and this year one of those they’re supporting is Julie Wyman, the filmmaker behind Strong!. Wyman and her film Strong!, along with the film’s subject, Olympic weight lifter Cheryl Haworth, came to Haverford in March as part of And the Winner is Nick Kahn and have been hard at work travelling and sharing Cheryl’s extraordinary story through Julie’s wonderful film ever since. It seems the hard work is paying off as the Washington Post recently named Strong! one of ten films not to miss at Silverdocs. If you happen to be in or around the Washington D.C. area this week be sure not to miss Strong! at Silverdocs!

8am this morning in the Arn ’76 and Nancy Tellem Fitness Center, Olympian Cheryl Haworth demonstrated some of the techniques that helped her medal in the 2000 Sydney games. END_OF_DOCUMENT_TOKEN_TO_BE_REPLACED

Look at these winners 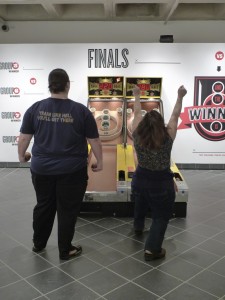 ! Filmmaker Julie Wyman and Olympic Weightlifter Cheryl Haworth stop by the gallery to play some skee-ball. Don’t forget to check them out at Haverford’s exclusive film screening for STRONG tonight at 7:30 in Sharpless.