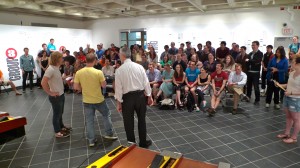 On March 16th, 2012 the Haverford College Exhibitions Program entered all 1,920 Haverford students, faculty, and staff into a single-elimination skee-ball tournament.  In the opening weeks 729 played competitive games.  On April 20th, after 7 rounds, only sixteen remained.  Before nearly 100 spectators, The Sweet Sixteen—thirteen students, three staff members, and one member of the faculty—competed for the top prize: 12 pledges made by over one-hundred 5th round players and a trip to Greensboro, NC, to be feted by artist Lee Walton and friends.  At 1:15pm, the final game was played: Nick Kahn ’14, a double-major in English and French, versus Director of Communications and Haverford alumnus, Chris Mills ’82.  With Chris on lane 1 and Nick on lane 3, they began their round together.  Chris finished first with a score of 290; Nick had one ball left and a score of 260.  His last roll, the very last of the tournament, a 40, took Nick 10 points clear.  Pandemonium.  And at that very moment, the title of the exhibition changed from And the Winner Is… to And the Winner is Nick Kahn.

And the Winner is Nick Kahn put a tournament to work.  And because this tournament was part of an exhibition, it was more than a tournament.  A tournament is a social form, a mode of encounter and exchange, articulated by people and artifacts, by specific means and ends in specific situations.  And this social form bent and prodded (and was bent and prodded by) the social form of a gallery exhibition, which is also a mode of encounter and exchange.  And the Winner Is Nick Kahn filled this hybrid social form with a content: a particular game, skee-ball, and a particular community, Haverford College, every member, without exception.

The game of skee-ball is an arcade game, a bar game, a boardwalk game, an amusement.  It’s a game played for quarters, kicks, tickets, and souvenirs, one without substantial ambitions, storied heroes, or dire consequences.  Players aren’t necessarily athletes, and athletes aren’t necessarily good players.  This game, a social form too, was taken up by the tournament form as something of a misfit toy: no one here was already a serious competitor, rolling a perfect or even nearly perfect score was definitely out of reach.  But notwithstanding or precisely because of both the difficulty and the ease, those who knew the game, whether from childhood or from yesterday, felt the pull: easy-peasy and challenging at the same time.  Months ago, whenever we described the Winner proposal to friends, particularly friends on staff, we were greeted with wry, in-it-to-win-it smiles, as though a particularly vivid memory had been liberated.  For most, coupling the words “tournament” and “skee-ball” made some palpable difference. 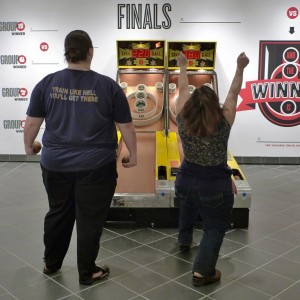 Open competition, all against all, provided a simple pleasure with an excellent alibi: “I want to play, I want to win, and I’ll play because I’m just good enough to win, at least a few.  So, I should practice…  a lot.”  Almost anyone could play—College Research Machinist and Instrument Maker Bruce Boyes even built a ball-launcher, a mechanical assist for players with physical disabilities.  Expertise at skee-ball was both a vivid dream and completely beside the point, both an invitation and barely relevant to anyone’s enjoyment or enthusiasm.

And so, the tournament became a medium through which this game and then everyone, all of Haverford, passed.  Every round we sent out email notifications to pairs of competitors; and because we had used that tyrannical monster, alphabetical order, to set the tournament brackets, many traits were mixed—status, gender, gpa, interest—but others were aligned: brother defeated brother, Smiths destroyed the Smiths, and a boyfriend and girlfriend discovered, during the first round, that they were not only simpatico but contiguous in the alphabet.  Also during the first round a professor was paired with another professor; each forfeited, or tried to.  One wrote, “I respectfully demur… back out… will not do it. Gambling, and all competitive and non-competitive sports, are against my religion…”  The other replied, “Well, my religion actively encourages me to run all risks and take every gamble… [but] my chair has threatened to regard me as a layabout if I sign up for one more extracurricular.  So, the real gamble is for tenure.” 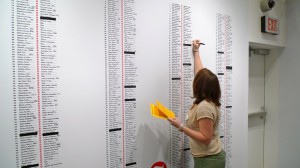 Everyone was in—even if in name only.  Literally: the names, all of them, were on the gallery walls.  We only redacted those who emailed to say some version of “no thank you,” such as the professors mentioned above.  But even so, those who opted out were opted in as having opted out: redaction bars—strips of black tape—explicitly marked this “out.”  As an exhibition, the community was on display, on view, for itself and to itself.  The tournament brackets, which wrapped the entire room, revealed the punctual state of the community but also the community in process: from 1,920 to 1,024 to 512 to 256 to 128 to 64 to 32 to 16 to 8 to 4 to 2 to 1.  In five weeks.  And as a competition, the community was set against itself, a community of competitors, shrinking through attrition, a community of winners and losers and ever more losers, including the neutral and indifferent and annoyed and forgetful: some missed their games, pleaded for extensions, and we said no.  All against all, but many for many too, because we won, lost, and opted out together, in plain sight of each other, and in plain sight of the very public scores and records.  We ultimately nominated and ratified one player above the others, Nick Kahn, and cheered his success.  At The Sweet Sixteen the spectators were all players, players who had played and lost but found themselves enthusiastic still, happily commiserating with the losers, winning with the winner.

If the tournament/gallery form is a social form, and if this form is an artistic medium, one with which we all could play, what then did it and we produce?  How did this form transform the content?  The game and the community?   It turned the game serious as detailed above, and it turned the visitors into players and players into competitors.  And these competitors didn’t go it alone.  They were invited to correspond, to play together. 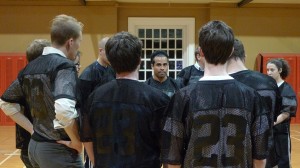 The tournament took a community of students, faculty, and staff and changed the terms of their relations: new acquaintances emerged, many across the lines that separate faculty from staff from students.  Competition was introduced, or rather, reintroduced: everyone at Haverford, the enrolled and the employed, had to work very hard to get in; everyone had applied—for admission or for a job—was found qualified, excellent in some way, and was then welcomed.  But even this welcome nestles us into particular strata.  Some pay, some are paid.  Some are paid more.  Some work for others who work for others who work for…  Some are more responsible than others.  Legally.  Some students are very good, others are better, others are only good.  At being students—but might be better at something else, brilliant even.  Some spend afternoons as athletes; others do too but aren’t necessarily called that; others have bones and muscles but use them for other things.  Some come from money, some don’t; some don’t want to; some hope to have their share or share their share. 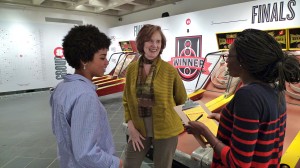 Add a skee-ball tournament to these.  Skee-ball is a pleasure and does reward practice; being-good-at-skee-ball is something too, another mark of distinction.  And while a few of the above strata were illuminated or reframed—a member of the staff did tell me “it’s rare that staff are invited over to the academic side of the college… and when it happens, we appreciate it…”—the tournament established a zone articulated differently, a zone completely in and of the college but somewhat free of it.  E.g., the difference between enrolled and employed was out of play, as were the others.  One day the president played next to a security guard.  The president’s scores were recorded by a student.  The guard came and went, but only after we had talked about the folks who work the night shift and my admission that we had forgotten to create after-hours slots to accommodate them.  He said, perhaps to be kind, “don’t worry about it, they could have made the time!  That’s what it’s all about.  Taking the time to make the time.”  The tournament was the medium through which these encounters and exchanges were produced; and the exhibition—and attendant artifacts such as this blog— was and is the medium through which the campus community came face to face with itself, with its limits and “game on!” enthusiasms. 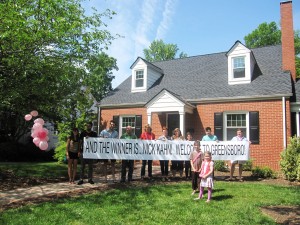 Nick won on Friday the 20th and then traveled to Greensboro, North Carolina on the 21st.  Lee Walton and friends took care of him: he was serenaded by solo sax, the player accompanying him, in both senses of the word, on a long walk through Greensboro.  Nick was also treated to a private tour of the Weatherspoon Art Museum, conversations with a few artists and poets, a home-cooked meal, and a marching, kilted bagpiper who played while Nick, Lee, and company tossed around a frisbee, attracting a larger and larger gathering.  Nick was feted in singularly interesting ways, and perhaps more importantly, became the occasion for a celebration that these folks enjoyed giving as much as he did receiving.  Walton employed the social form of celebration, turning it as well into a medium: the appreciation was sincere, the thrills palpable, but each gesture was small, distinctive, each event off kilter and unique, as though to win big could be an idiosyncratic affair, and a smallish feat—winning a skee-ball tournament—could be huge, deserving of elaborate rituals and convivial pursuits.

The exhibition put the tournament to work, and the tournament pressed Haverford’s achievers to win and play together and invent minor and major bonds across campus communities.  Over now, but continuing to play upon the outcome, And the Winner is Nick Kahn put our eponymous winner through meetings and sustained attention: he had to travel and accept plaudits, give interviews, collect and document various pledges—on May 11th Alex Norquist, Associate Professor of Chemistry, fulfilled his promise  “to spend 30 minutes blowing stuff up.”  And Nick put up with the very use of his name as title and topic.  An excellent sport, he heard us say, “perhaps we’ve worked you harder as the winner than you worked to become the winner.”  Living up to achievement, living up to what even this exhibition achieved, remains too a labor in excess of obvious costs and rewards.  So the work of this work continues. 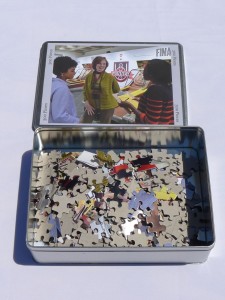 The Class of ’12 gift to President Joanne Creighton, May 13th