According to two of its members, visiting artist Sal Randolph and Princeton historian D. Graham Burnett, The Order of the Third Bird takes its name from the following apocryphal tale:  Zeuxis, a skilled painter, completes an image of a boy carrying grapes. He then leaves it outside and hides in the bushes to observe how the birds might treat it.  Three birds approach.  The first pecks at the fruit, but the second spies the boy, is frightened, and flies off.  Zeuxis happily determines that with this painting he had finally achieved true verisimilitude.  A third bird, however, stops in front of the painting and assumes a pose of contemplation, seemingly lost in thought.

This third bird, the one who stops to contemplate a work of art, neither falling for it nor flying away, inspired the Order to formalize a practical aesthesis in which an assembled body of viewers attempts to Encounter, Attend to, Negate, and finally Realize a made thing, focusing entirely on the object itself and not its history or meaning.  About the practice, Randolph writes,

A discipline of the senses is pursued. Both learning and judgment are bracketed, in conjunction with a carefully controlled hedonistic asceticism.

Last Wednesday in Magill Library, Randolph and Burnett staged just such an asceticim, for pleasure and discipline. Together with John Muse, Matthew Callinan, Josh Ramey, and myself, they led an exploration of Branded Chest, 2008, a photograph by Hank Willis Thomas currently held by Haverford’s Special Collections.  Willis Thomas had visited campus not two weeks ago and this image was selected, secretly, by John Muse working with Magill’s John Anderies and Bruce Bumbarger.  In a ritualized, liturgical process—which I’ve been asked to speak about only obliquely —the Order examined the photograph, after a dramatic unveiling, and attemped to encounter it purely and completely, to let it greet us as we greeted it. 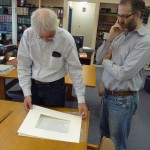 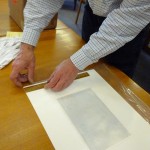 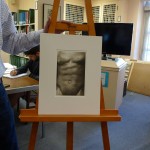 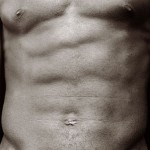 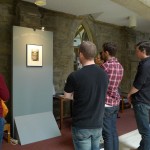 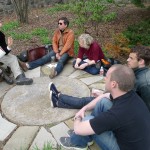 The selected image depicts a nude male torso with rippling abs and pecs. Seared onto the left pec is a raised Nike Swoosh. The photograph foregrounds its topic: branding, both corporate and corporal. The Order asks the viewer, however, to put away any interpretive impulse, any prior knowledge of the photograph or its histories, the artist and and his intentions. This is meant to afford the object a space in which to present itself devoid of any critical interference. Approaching the work alongside Randolph, Burnett, and the group, I was skeptical of this process, of its efficacy, indeed of its possibility. How can you un-know whatever knowledge you bring to a made object? I found my (rather surprising) answer in one particular stage of the 28 minutes of looking: “Negation.”

In “Negation” the viewer must “refuse; unmake the work and self.” Meditating on this edict amid the awkward shuffle of the sparsely populated Magill atrium, feeling self-conscious and not a little bit ridiculous, I tried to unlock the Order’s imperative. What does it mean to “unmake” a work? The self? Anything, indeed? I started with the basics: of what was this cut, athletic body in front of me “made”? Sets. Crunches. Curls. Presses. Repetition.What would it be like to see this in the negative? In the “un” space? Reverse crunches: lying down. Reverse curls: opening the arms. Repeat until the hard body is soft and light; unbranded, uncut, and unmarred. What was I left with? A child.

Watching this all unfold, transforming the image/object into what it might have been before the moment of exposure was as ludicrous as it was powerful. Again, I became self-conscious; had I “done” the process “correctly”? Did I arrive at something at least vaguely “correct”? The anxiety stewed until the Colloquy, the conversation that succeeded the four stages of looking. I discovered that I was not alone in my findings—all participants described, in some form, the image of a child.

The discussion was extremely rich and rewarding. The revelations and ideas described by the other participants altered the photograph and the very notions of looking that I had previously held.  Once I was skeptical, and now I am a believer.  In the richness of made thing and the in.

See all posts about Sal Randolph.

See all posts about The Order of the Third Bird.